How Our Startup Failed Despite Good Idea and Paying Customers 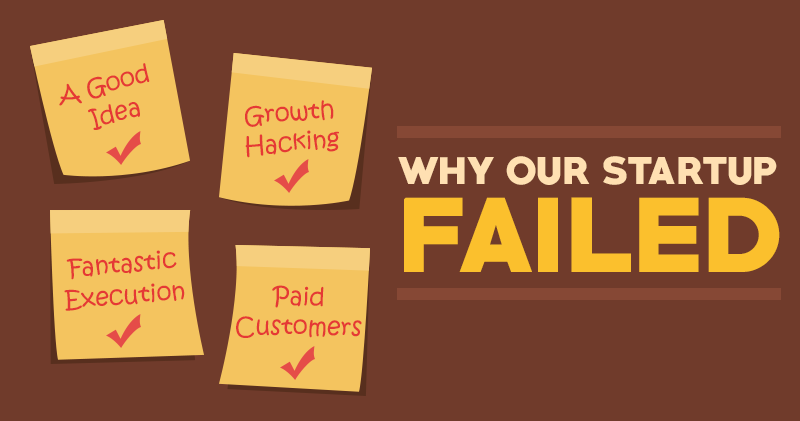 You may have already read the post where I discuss how we built over 10 startups in a year. I was suggested that sharing details on those startups would help entrepreneurs learn from our successes and failures. I agreed and hence here is the first offering. In this post I am going to talk about how we came about an idea called Mindstack Connect, growth-hacked it to get a lot of users, fulfilled someone’s dream and failed fast to move to the next idea.

Idea for Tapping the Jobs/HR market

If there are established markets out there that will flourish forever, Job hunting is one of them. Food/Hospitality industry would be the second. We thus wanted to build a startup that marries these two. We wanted to create the ultimate place employers and jobseekers had to visit in order to find what they wanted.

We asked around and found that both parties in the transaction were having issues with the current state-of-the-art. Selecting the right people from hundreds of resumes was a big challenge for employers. Jobseekers had no way to prove themselves other than submitting their CVs or Resumes for a job opening, which may not even get a glance.

With that problem at hand, we set out to solve it. My partner David came up with a brilliant idea to solve this problem. The idea is to allow jobseekers to invite their colleagues and friends to vote for them. David explained the human psychology behind the idea. Humans would not (or at least hesitate to) recommend someone for a job if the person was not fit for it. At the same time a person would happily recommend a friend if the friend was good at that job. Those who get a lot of recommendations, thus, are at least team players and most of the times good at their jobs.

Getting a recommendation is a job in itself. The traditional ways of getting recommendation are tedious and cumbersome. In the world where Millions of people are online at any given time why can’t we ask them to recommend a friend by asking them on Social media? How about a post without cats on your timeline that says that your friend, who you owe a lot to, could use your help with a job of his dreams? That is exactly what we built. A single click to recommend someone and even to ask others to recommend your friend.

The employers could now interview the top candidates in the order of recommendations until they find the one they like. Jobseekers can show how badly they want the job. Employers also gained brand awareness as jobseekers shared their job posting on social media. We setup the open graph tags on the job posting page in a way that whenever that page got shared on social media, it was the employer’s logo that people saw on their timelines.

Once we built it, we had the traditional chicken and egg problem. Employers would not buy a listing from us unless we had jobseekers. Jobseekers won’t apply if we had no jobs. In order to get ourselves out of this predicament, David came up with a brilliant strategy. This is pure Gold so pay attention guys.

Before we go into the strategy in detail, let me show you what kind of traffic we got every time we implemented it. We started in January 2014 and within a few days of opening shop, we had a decent amount of visitors. We could have repeated the same process to get even more visitors, but we were trying to validate the idea first. How did we do it?

In order to find jobseekers and employers we had to rely on established job boards.

We did two things to get traction. We cold called local Boston Pizza franchises and asked them to post with us for free. We explained the benefits of getting their name out on Social media as well as the ability to quickly find jobseekers who really want the job. They bought it and eventually became a paying customer. Note that we did make some money with Mindstack Connect. We secretly wanted to get all Boston Pizza franchises to post their jobs through us.

The second way we got traffic is pure growth-hacking. We were concentrating on a province in Canada so we went with Kijiji. For those from United States who haven’t heard of Kijiji, it is like Craigslist for Canada. We went to the Jobs section in hospitality industry.

We contacted those people who posted jobs on Kijiji and asked if it was ok for us to post their jobs on Mindstack Connect. We explained the value to them and offered free listing. Many of the employers responded. We asked most of them to guarantee that they will call the top three jobseekers for interview. This got a mixed response.

Here is the secret. We got permission from the employers to list jobs on Mindstack Connect. We then re-posted jobs on Kijiji and asked jobseekers to apply through Mindstack Connect. We let it run that way and continuously posted jobs on Kijiji. We got more than 700 jobseekers who applied for at least one job in a week’s time. Many of the people uploaded their pictures as well (we removed a lot of profiles that did not upload resume).

We tried a lot of ways to make money from Mindstack Connect. We tried adding ads on the job posting page. We got some clicks making us $0.45 total, which was not worth renting the real estate on our website. We got some paid job listings, which was a nice addition.

We planned on adding services like professional resume writing, but the integration seemed like too much work and since we could not get the idea to work as we expected, we did not look into it. In short, we did not make much money from it.

How we still get traffic

Even today we get a few users to Mindstack connect a day. This is because I used my SEO tactics for startups and entrepreneurs that I shared in a post earlier. We created a separate page for every job posting as well as for every jobseeker. We created a sitemap with URLs of those pages and added it to Google Webmaster Tools. Those pages got indexed by Google pretty quickly.

We ranked for names of those people as well in some cases for the jobs at those companies. Those terms end up sending a little bit of traffic till date.

Lessons Learnt from our failure

Mindstack connect taught us a lot of lessons. First one is that if you are creative you can get people to your brand. However, it is not sufficient.

Primary reason of Mindstack Connect’s failure was the industry we targeted. Food and hospitality industry couldn’t care less about social sharing. They don’t care much if their potential employee has a million friends on Facebook. They want someone to fill a position at the earliest possible time.

If we had chosen SEO or Digital Marketing industry, this could have had better results. We are going to give it a go soon to see if we can make it happen. If you work in that industry feel free to leave a comment to get a free job listing.

We also created an amazing IP out of this startup. We are going to utilize it for our next venture called Vote Studio. It is a social voting system to hold polls on websites in a way that your polls go Viral. I hope you will help my startup by taking this poll

The most satisfying experience

We were not the ones who give up easily in the face of adversity. We created yet another website to test the waters of our IP. It was called MindstackXP. It was a coupon website that allowed people to participate in a contest to win gift cards. Top 3 winners would get a free gift card and the rest could get a discount coupon. It was a win-win situation as the restaurant got new customers and people won coupons.

With top gift card being $100 there was a decent competition. People shared aggressively and we started getting people from social networks. They would come to vote for someone and enter themselves as well.

We got our friends at Boston Pizza to promote this event on their Facebook Wall, which helped as well.

The winner was Cynthia Varennes who told us that this was the first time her family could afford to go to Boston Pizza. It was such a touching moment for us. It was worth all the effort we felt our efforts had paid off.

Dinesh Agarwal is an academician turned entrepreneur. He got his Ph.D. in Computer Science from Georgia State University where he also started his first venture Bookup to help students save money on college textbooks. He is also the founder of Pro Start Me, a service for entrepreneurs to realize their tech based ideas into products. Got a great idea? Let us talk

Exclusive advice for founders from Experts on
ideation, team, development, growth and fund raising..
Your information will *never* be shared or sold to a 3rd party.